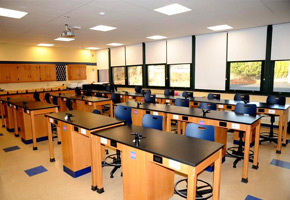 As the educational paradigm advances toward an emphasis on science, technology, engineering and mathematics programs – known as STEM programs – many schools are looking to upgrade their facilities in order to remain cutting-edge. LAN has several STEM projects that are in progress or were recently completed.

A four-classroom science renovation was recently completed at Holdrum Middle School in River Vale. The project commenced with a feasibility study in December 2012. The school district wished to move quickly to meet a summer construction schedule, and by January 2013, LAN began preparing schematic drawings and project applications for submission to the New Jersey Department of Education. Due to existing spatial limitations, variances for ceiling heights were requested and approved for two of the rooms.

Construction budgets are always a concern, and to give the district flexibility in awarding the project, LAN developed the bid documents to include two science labs in the base bid along with alternates that would allow the district to renovate either one or two additional rooms as their budget would allow. The district also worked directly with Longo Associates of Ramsey for casework selections, and LAN assisted the district in coordinating the casework selection and installation with the renovation work to mitigate any potential delays.

The project was out for bid by April, and the school district awarded the renovation of all four science rooms in May. By the end of June, construction commenced, and despite the tight time-frame, the $600,000 project was substantially complete by September.

Another STEM project currently in design involves the renovation of Science Labs at Ferris High School in Jersey City. LAN evaluated the existing STEM facilities and based on the district’s budget, developed a scope of work to include two lab classroom renovations and the upgrading of the shared teacher’s preparation and storage rooms. Schematic designs have been developed and approved by the district. Submission to the NJDOE is in progress as well as the development of drawings and specifications suitable for bidding of the project. The estimated cost of this renovation is $750,000.

The established timetable includes submission of the project over November and December of 2013 followed by bidding of the project in January or early February. Work is scheduled to commence in June of 2014 with expected completion by September of 2014. The River Vale and Jersey City projects join a substantial list of STEM projects completed by LAN, either as stand-alone projects or as part of larger school projects, including work at Boonton High School, Ramsey High School, Fair Lawn High School and Hawthorne High School. LAN continues to work with several school districts to accommodate the demands of emerging educational needs.