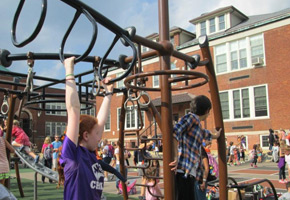 The playground work included demolition and construction of new perimeter retaining walls, replacement of failing perimeter fencing, replacement of uneven and deteriorating asphalt surfaces, stormwater drainage improvements and landscaping. The referendum funded the site work, stormwater improvements and the new asphalt surfaces while the P.T.A provided funding for the new playground equipment and rubber safety surfaces. The district and community both realized the importance of the school playground areas for physical education and recreation during and after school. A tremendous amount of thought and planning went into the new playground designs, which were a collaborative effort between parents, students, staff, the Board of Education and community members. Their desire was to transform a sea of black asphalt into an inviting and stimulating environment that would draw children in while improving the quality of their physical recreation and playtime. This was accomplished by incorporating color into the asphalt to designate separate play zones. Graphics for kickball fields, box ball courts, running tracks, hopscotch and wall ball also helped to break up the scale of the asphalt surface

At the Chatsworth Avenue School, new age appropriate playground equipment was selected to maximize challenges and play experiences for the different age groups. The equipment was located to maximize effective use of the entire playground. Safety was of paramount concern, so rubber safety surfacing, in lieu of engineered wood fiber, was installed below all new playground equipment to minimize injuries from falls. Seating areas for use by students and parents were also provided. Provisions for ADA accessibility were also incorporated into the overall design to ensure access to the entire playground by individuals with disabilities.

“Our new playground has enhanced our school far more than we expected. It is a community gathering place for families on weekends and after school. Our physical education program is able to utilize the space to enrich the curriculum. Students absolutely love the playground and we already see tremendous growth in their creative use of the equipment, their balance and upper body strength,” said Principal Gail Boyle. “Our whole school climate has been enriched by the design process and the fabulous outcome!”

Interior work consisted of the renovation of nine restrooms located on all floor levels of the Murray Avenue School to replace failing domestic water and sanitary infrastructure piping. The century-old galvanized piping was severely corroded, reducing water pressure and compromising water quality. The replacement of this core piping required a full restoration of the toilet rooms. Low-flow toilets and lavatories, as well as waterless urinals, were installed to reduce water consumption. Energy efficient lighting and improved mechanical heating, ventilation and exhaust replaced older systems and will save energy. Seamless epoxy wall and floor finishes were selected for ease of maintenance and sanitary purposes. Each toilet room was redesigned to provide barrier-free ADA accessibility.

The fire door project included the replacement of three sets of stair tower door assemblies that were original to the building’s construction. The new door assemblies bring the facilities into a higher level of code compliance by limiting the spread of fire and smoke through the building to better protect the life, safety and welfare of the building occupants.

Electrical improvements included replacement of old wiring and the installation of additional convenience receptacles in all classrooms to power computers, printers and other peripheral equipment necessary to meet current and future technology needs of the educational programs developed by the District.

Although the projects were logistically difficult with an aggressive summer schedule, they were completed on time and turned over to the school for the start of the 2013-2014 school year. Phase Two, which includes similar work at the Mamaroneck Avenue, Chatsworth Avenue and High Schools, is aggressively scheduled to commence construction during the summer of 2014.