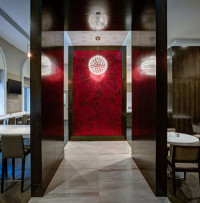 LAN with their interior designer, Anderson Miller Ltd. was hired to convert two existing second floor meeting rooms into a new Marriott ‘M Club’ Lounge.  The new lounge design was based on Marriott’s new concept initiative requiring several different seating arrangements such as banquet and chair seating, casual lounge areas, and taller communal tables providing a variety of work/relax options for occupants.  Smaller tables of 2 to 4 people were integrated throughout allowing for casual impromptu meetings as needed. Visitors are greeted by five cylindrical hanging pendants with crystal strings through a set of glass entrance doors.  Upon entering, circulation to the buffet leads you through a series of dark wood lacquered portals highlighted by a framed Italian tile mosaic tapestry.  A center island was incorporated into the buffet layout to promote flow from the juice bar, hot & cold buffets, and coffee station.  All seating areas were configured with technology in mind, line of sight for TV viewing, and WiFi/charging stations.

In addition, LAN reconfigured the existing sixteenth floor concierge lounge and meeting rooms into nine new guestrooms and suites and the renovation of three existing rooms.  All rooms and suites were designed to be connected with each other and within certain cases, the entire floor if needed.  The finishes and furniture for the rooms were again designed in keeping with the look of the new Marriott concept.  This included built-in custom closets and headboards, cantilevered desks, television and fireplace wood surrounds, and sliding barn doors.  The finishes of the new rooms similar to the lounge focused on a neutral, warm palette with contrasting colors and textures.  The new M Club lounge was completed in March 2014 followed by completion of the rooms in July 2014.