In 1965 John A. Lacz founded LAN Associates. A humble beginning, in a small office, at the time he could not imagine that over half a century later his company would still be going strong and employing over 100 people across four offices in three states. For those who knew him well his success is no surprise.

LAN Associates began as a small engineering and planning firm located in Paterson, NJ that consisted of three people: John Lacz along with a part time draftsman, and a part time secretary.  His business plan was simple. “Get work, produce on schedule and budget, make payroll, and keep clients happy.”  His method was simple too. An Air Force veteran with an Engineering Degree from Stevens Institute of Technology, he worked 50 to 60 hour weeks while raising three children. 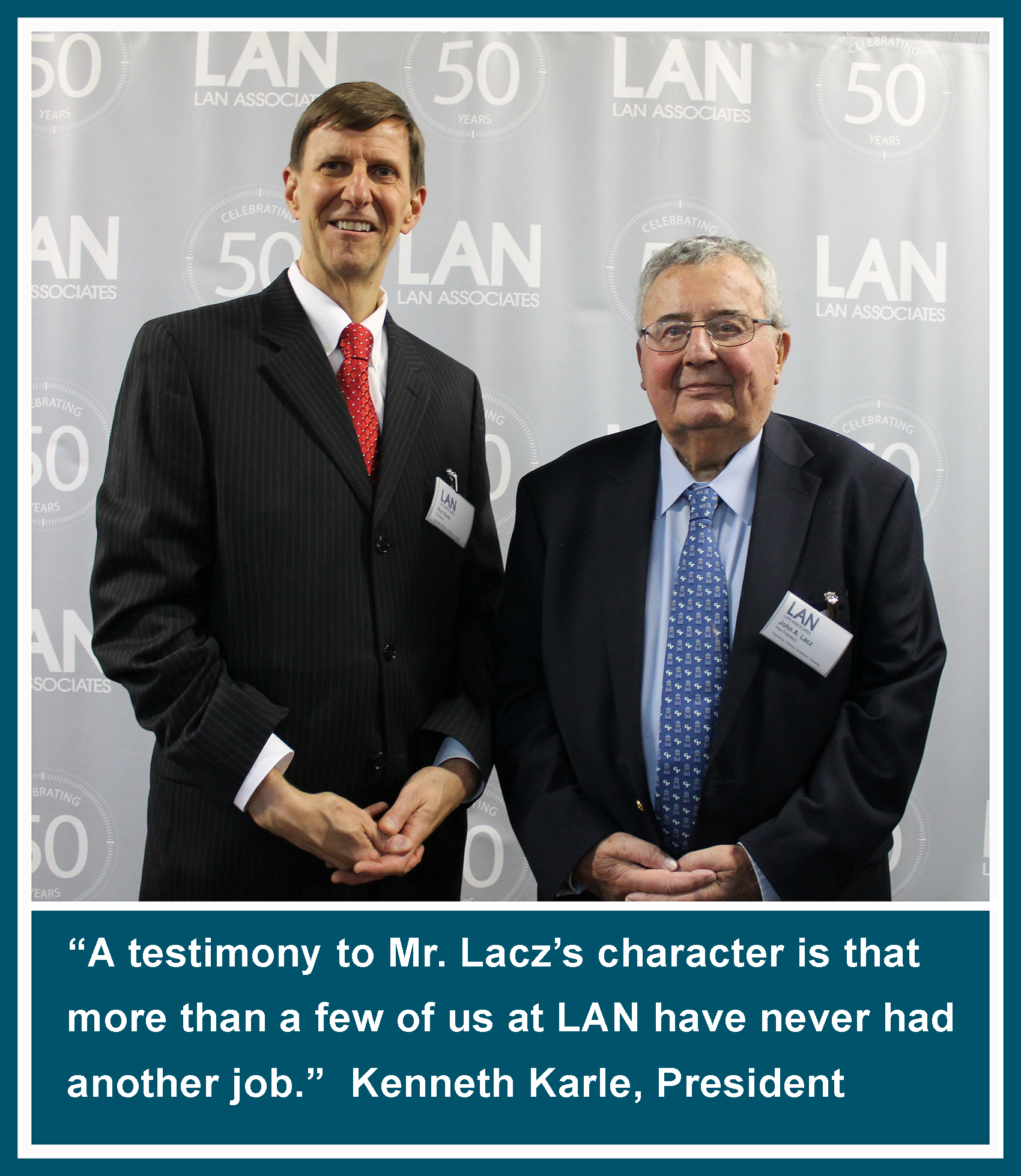 John’s hard work paid off, and after five years he took the next logical step for any successful business, he began to expand his company. He relocated LAN to a bigger office in Hawthorne, NJ and in 1978 he hired LAN’s current President Ken Karle. A few years later in 1983 he brought on board LAN’s now CEO Ronald Panicucci and Stephen Secora who would eventually become Vice President and Company Secretary. The influx of new talent, coupled with a culture that encouraged employees with diverse skill sets to pursue their interests, put the company on the path to becoming the full-service engineering, planning, architecture, surveying firm it is today.

John Lacz believed the key to success was hiring the right people, assigning them challenging projects, and having faith you can safely delegate responsibility. He rewarded success and very deliberately designed LAN as a “C” corporation, offering his employees the opportunity to buy shares in the company and share in its success. This basic tenet of John’s management style is still ingrained in LAN’s current corporate culture. To this day, LAN still grows by encouraging employees to pursue new revenue streams and giving them the leeway to take on new challenges unencumbered.

In 2001, LAN Associates moved to Midland Park, NJ where it is currently headquartered to in a large office that accommodates our continued growth. In addition to the NJ home office, LAN has offices in Goshen, NY,  Voorhees, NJ, and Bethlehem, PA.

Although John stepped down from full-time service in 2006, he remained a Director and Officer, and assisted on special projects.  He has influenced the lives of every LAN employee past or present. The impact of his leadership lives on through the culture he created at the firm he started in a small Paterson, NJ office in 1965.

Those at LAN who worked with him directly speak of him often and impart the wisdom gained from working under his direction. The longevity and success of LAN Associates and the acumen and vision of LAN’s current management team is directly attributed to John’s management style. This style is often summed up by a single indelible quote, “Make every management decision with your mind, your heart and your wallet.” 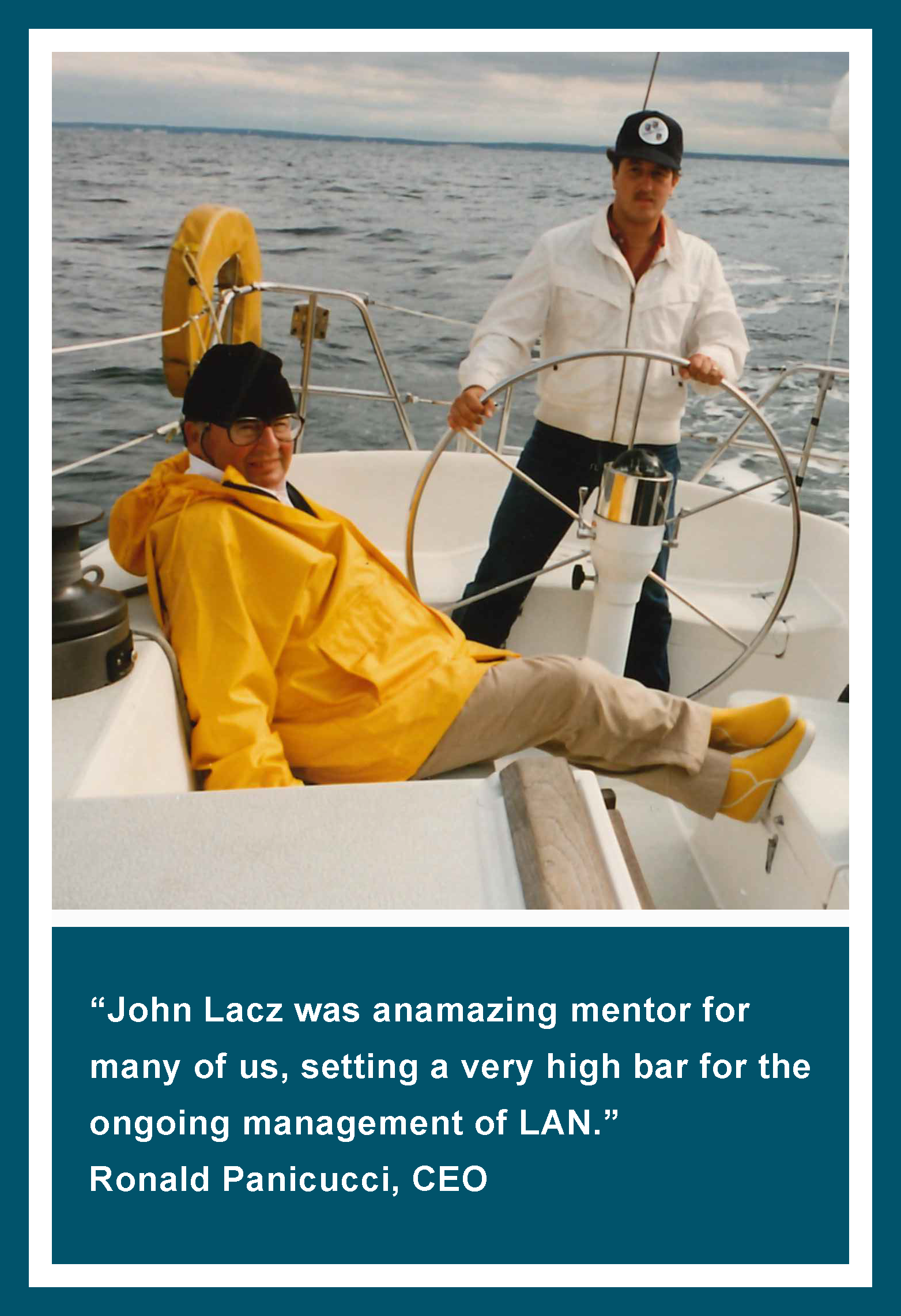 John A. Lacz was born in Paterson, New Jersey on August 22, 1932. He graduated from Don Bosco Boarding School in Ramsey and went on to earn a M.E. degree from Stevens Institute of Technology in 1953. He remained a proud alumnus of both institutions and continued to support them throughout his life. He spent his career building his company, LAN Associates, and working as a Professional Engineer and Professional Planner who was licensed in an impressive seven states and the District of Columbia.   John was also a First Lieutenant in the United States Air Force where he had experience with large operations before receiving an honorable discharge.

Outside his work at LAN, John had many accomplishments. Before he founded LAN, he was a Project Engineer for Curtis-Wright Research Division in Pennsylvania and a Project Engineer/Manager at Atlantic Research Corp. He was a member of a team studying limited warfare for Special Projects at the US Department of Defense. He was the Chairman of the Board of Ridgewells Caterers in Washington, DC. John was also the VA Chairman of the International Symposium on Foam Plastics which was sponsored by the National Academy of Science.  As the founder of Please Save Our Parkland, he was responsible for the John W. Rea Mansion and Goffle Brook Park nomination to the National Register of Historic Places.

John passed away on February 5, 2020. His legacy lives on through his family and his contributions to the profession he dedicated his life to and the company he founded.