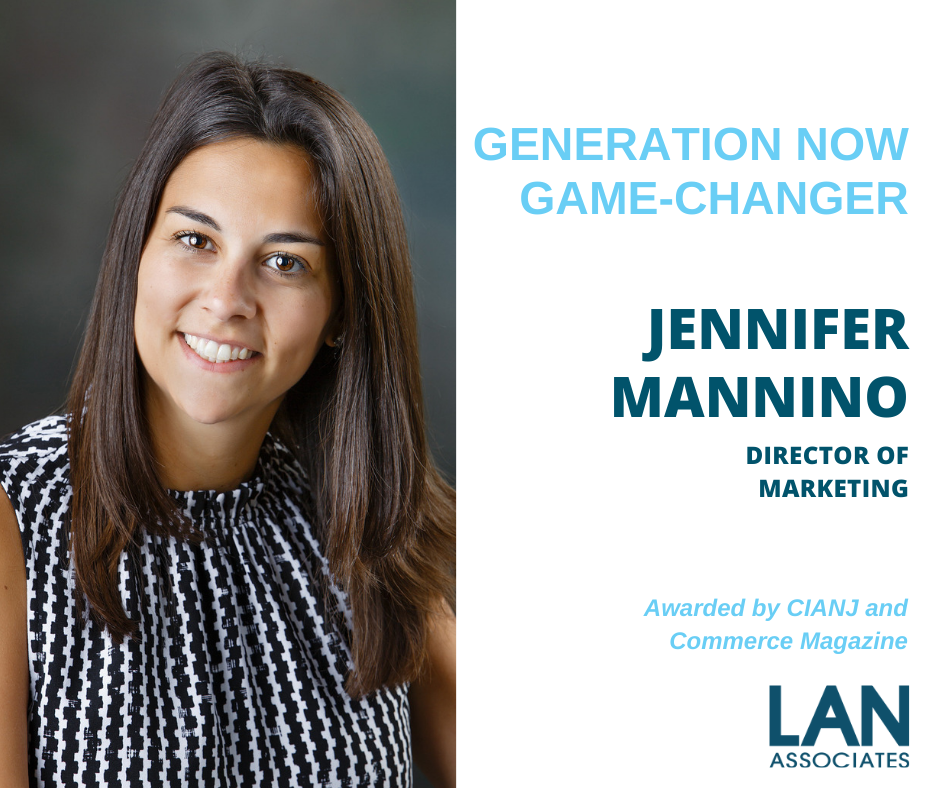 LAN Associates Director of Marketing Jennifer Mannino spends her days shining the spotlight on the accomplishments of others. On Friday October 18, however, her own impressive achievements put Jen at center stage as she accepted the Generation Now Game Changer Award from the Commerce and Industry Association of New Jersey (CIANJ) and COMMERCE Magazine. Given out in recognition of young professionals who are shaping the future of business, the acknowledgment recognized the years of hard work Mannino has put into building the Marketing Department at LAN, a 100 plus employee architecture and engineering firm headquartered in Midland Park, New Jersey.

When Jen started working for LAN Associates in November 2014, the firm had no formal marketing department. Marketing efforts consisted of a few employees in different departments sporadically placing ads or occasionally acting as a sponsor. On her first day at LAN, Jen started putting together formal processes and new initiatives that have reshaped the company’s voice in the industry.

Mannino immediately took charge of all aspects of LAN’s marketing. She planned all publicity for the firm’s 50th anniversary, revamped the process for proposals, initiated the use of the company’s first CRM, and implemented formal yearly marketing and business plans.  For the past five years, Jen has been a vital part of the firm’s business development strategies and efforts.

“Having an open and growth mindset, embracing new ideas, and implementing strategies outside of the ‘norm’ have been my key goals,” said Mannino, when asked about her work leading to the award. “I’m thrilled to be a recipient of the Generation Now Game Changer Awards.”

In addition to her efforts to increase awareness of LAN’s services to the firm’s clients, Jen also spearheads various internal company initiatives.  She was instrumental in launching LAN’s interest groups, including the Women’s Network and the Research & Innovation Committee. She also helped launch the company’s first mentorship program and organizes the firm’s quarterly town halls.

“Jen has truly been a game changer who has developed a new department that serves as an invaluable resource,” said LAN Vice President Steven Ramiza when asked about Mannino’s impact at the company. “We are proud of everything she has accomplished in her relatively short time at LAN and we look forward to what she will bring to the company in the future.”

During Mannino’s tenure, LAN has seen substantial growth and the firm has recognized marketing’s role in the company’s success. Jen was named Director of Marketing in 2018 and since then the department has tripled in size. Jen leads by example and always finds new ways to improve business practices.